“Performance Insurance” Catastrophic Loss, and the Role of Attorneys 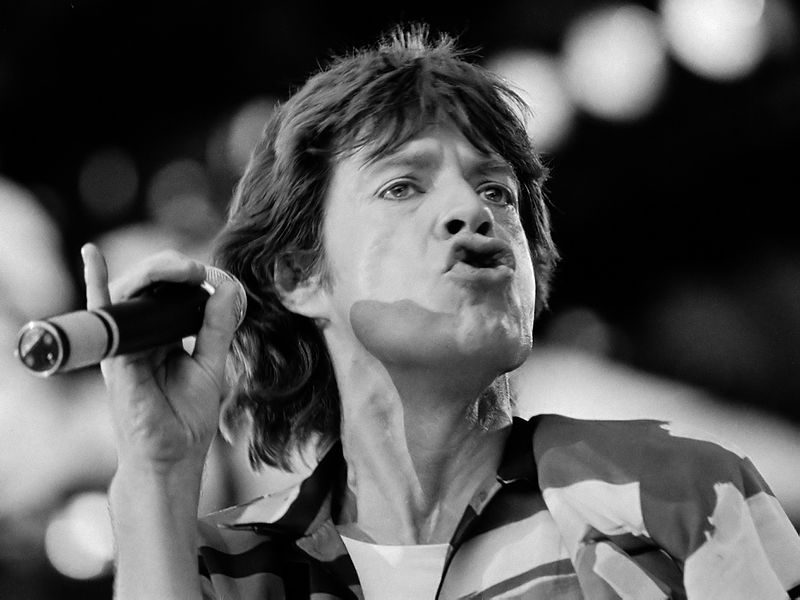 The Rolling Stones, Sir Mick’s Disabling Trauma, L’Wren Scott’s Death by Hanging, and Something a Bit Like Life Insurance

Sir Mick the Man at 71–No Trip to New Zealand

This is a part of a complicated insurance claim.  It is also a story, without looking like it, of a full-employment event for lot of lawyers. I am simply going to signal where I think this probably happened by the letters LWS with some short notations. For some history on the background life of one of the principal characters in the story about the be sketched, see Kim Ross, “Fashion Designer L’Wren Scott’s Mental Health. . . . ,” The Style of the Case Fashion Law (November 11, 2014)

Sometimes commercial musical (or analogous) performances run into trouble. When this arises, it usually happens because a star (performer) can’t come; a famous opera singer gets sick; the hand of a well known cello player is broken by an angry lover;  a world renowned banjo player is incarcerated; the symphony-ballet conductor is arrested for murder; and so forth. Usually it is the venue or sponsoring organization (West Texas Society of Baroque Ballet) has insurance to cover ticket refunds, statistically fewer ticket sales; losses of various other kinds; expenses, lost profits, and so forth.

Now suppose a famous performance group (probably through a service providing company, maybe named something like Stone Touring Services, LLP, a Deleware Corporation, takes out insurance on itself in case it has to cancel a concert. They may need this for a whole variety of reasons. Now suppose a group took out life insurance on a non member, for example. The member might have such strong feelings about their wives, mistresses, children, someone else’s children, or a dearly beloved head of a government that if any of them were to die, they could not go on with one or more concerts and would need to compensate the venue and the organization sponsoring the event.*

(*It would be strange for the venue or organization not to have their own coverage, and for the contract between the performers and them not to have a no-subrogation clause, but lots of things are possible. Then again, they might be something like an insured under the performance policy.  They might, for example be named an additional named insured entitled to recover if. . . . Or the organization might have a lien on amounts the insurer pays. Interestingly, at least one media source says that the named payee on the  settlement check was AEG LIVE, which apparently specialized in this sort of sort of work. (Michael Jackson’s estate was involved in a similar war with his insurers over the same sort of issue).

In any case, roughly this arrangement was made by the Rolling Stones (and therefore Mick Jagger. The policy covered the deaths of some family members, and it looks like some others, if those deaths were “sudden and unforeseen”—the third word might as well have been “unexpected”—and apparently not caused by antecedent health conditions. These health conditions seem to
have included mental health. Maybe there was also an exclusion for sudden and unforeseen death caused by known medical conditions. LWS: DRAFTING OF POLICY OR ENDORSEMENTS.

Of course, at least for a brief interval Scott’s death was not unforeseen by her, nor was it sudden, as to her. But that’s not the right
point.  (Also, if she was just fooling round, experimenting, as it were, then her death it would not be  foreseen by or foreseeable to even her. The same might be true if she were stoned, as it were.) LWS: COVERAGE IMAGINATION.

What happened was that Jagger’s long time girl friend (since 2001, say some media sources) committed suicide by hanging herself in her luxury Chelsea, Manhattan apartment shortly before the Stones were to make a tour of New Zealand and Australia. (The tour was cancelled but rescheduled for October.)

The band had the kind of insurance I just sketched. The policy limits were apparently $23.9M, and the Stones filed a claim for approximately $12.7M.  The London insurers denied coverage no doubt on a whole variety of ground. Chief among them, of course, was that her death was not unforeseen, not sudden, and was the result of preexisting mental health condition about which
“everyone knew.” The insureds under the policy—one issued by 12± insurers (what the British call underwriters)—sued in July 2014.  Thereafter, the case moved pretty fast.  LWS: MULTIPLERESPECTS, INLUDING COVERAGE ADVICE, DENIAL DECISION-MAKING, DENIAL LETTER DRAFTING, LITIGATION, MAYBE ALSO AS ADJUSTER OR CLAIMS MANAGER

The insurer also had doubts about the need of the Stones to cancel the trip.  Probably the insurer would lose this one since Mick, 71, was immediately diagnosed with a mental problem—anxiety perhaps, feelings of guilt maybe–which disabled him for
performing the kinds of things for which he was famous. His doctor had diagnosed him with “acute traumatic stress disorder,”–some have called it PTSD, but everything is being called this these days–apparently aggravated by strickening grief, as he more-or-less claimed. Significantly, part of Mick doc’s script was not to perform on stage for at least 30 days.  LWS: ADVISE (Maybe even of the M.D., AND LEGAL IMPACT OF P.R. PLANNING AND EXECUTION.

In cases like those of L’Wren’s death, suicide by hanging is usually sudden, although the decision as to whether to commit suicide may not be.   So far as others are concerned, it is usually unforeseen and/or unexpected.  In her case, the real issue will be her mental conditions for the considerable period of time leading up to her hanging herself. LWS: COVERAGE ANALYSIS, ADVICE, LITIGATION PREPARATION,AND DRAFTING There may have also been a “beyond her control” clause in the policy.  I get this only from second-rate NY print media.  I have not seen the policy, hard though I have tried to get it. It’s difficult for me to see how the insurer’s could lose this one.  I don’t see how the insurers could lose this one, except for my She-was-merely-engaged-in-some-sort-of-dramatic-experiment idea. LWS: COVERAGE ANALYSIS, ADVICE, AND PRESENTATION.

In October of 2014, the insurers sought to take depositions of L’Wren’s family in Utah, where some of them lived and where she grew up. They also sought to take the deposition of, and no doubt obtain documents from her NYC assistant and maybe the executor of her estate.  She was, at the age of 49, after all an artistic fashion designer and former model. (Newspaper sources are
full of pictures of her. Some wonder why a woman that elegant-looking–at least in her relative youth and before, well, guess what–would hang around with Sir Mick. Maybe she dressed him; afterall  he looked good for a gentleman near the verge of becoming elderly) LWS: LITIGATION–BOTH SIDES OF THE SUIT AND BOTH SIDES OF THE ATLANTIC, PROBABLY ALSO THE THE PACIFIC SINCE NEW Z AND AUSTRALIA MIGHT ALSO BEEN INVOLVED.

At the same time and no doubt for related reasons, the insurers were interested in the fact that she had cancelled her participation at a fashion show in London not long before her death, and it was interested in her then current financial position, or that of her virtually personal corporation. (One knows that there had to be one; they all have them.) LWS: INVESTIGATION AT LEAST + OPINION + ADVICE. All of these inquiries were well within the kinds of things it was reasonable for the insurers to ask about. LWS: LITIGATION.

Before any of these depositions took place, and the insurers either had obtained court orders to take such discovery, including depositions, the case was settled.  The media does not say what the amount of the settlement was.*  One can bet that it was
substantially lower than the $12.7M sought, since the settlement took place just before potentially damaging depositions.
But then again, I could be quite wrong about this. (*The media reporting was in early November 2014) LWS: LITIGATION SETTLEMENT MANY FUNCTIONS.

IF MICK AND THE BOYS, AND THEIR LAWYERS, TRIED TO OBTAIN LEVERAGE BY SUGGESTING THAT THE INSURERS WERE ACTING IN THE ENGLISH EQUIVALENT OF AMERICAN INSURER BAD FAITH LAW. LWS –SUCH AS I OR LWSs LIKE ME, WOULD HAVE BEEN INVOLVED IN EVERY RESPECT, INCLUDING PREPARING TO BE EXPERT WITNESSES.

Now for a completely speculative conjecture.  The principal reason for having the oddball policy the Stones did was because of concern about the road toward suicide L’Wren was on and what the band knew would be the immediate consequences for the band’s leader.  In a way this was, therefore, non-performance insurance the principal of peril being the suicide of L’Wren and the principal risk being Sir Mick’s short-time disabling.  (Mick’s disability being another risk vis a vis the band’s having to pay contract damages to the sponsors of the various concerts, or subrogation damages to their insurers.) The trouble was that if anything like this conjecture is correct, and if there were lawyers involved in planning how to protect the band against the peril-risk, those lawyers were guilty of massive malpractice in terms of advice given, preparation therefore and transaction handled, unless the band itself, or its business agents consented to the arrangement, i.e., taking yet another risk, to wit: denial of coverage by the insurers. (Theoretically, I guess, there could be coverage even for that.)

An  entirely irrelevant curiosity question: After reading some of the accounts in the various media, I notice that there is some difference in wording. Did she hang herself? Or was she hanged by herself? I can’t help but wonder if a musical linguist as dynamic as Sir Mick pondered and resolved the matter.