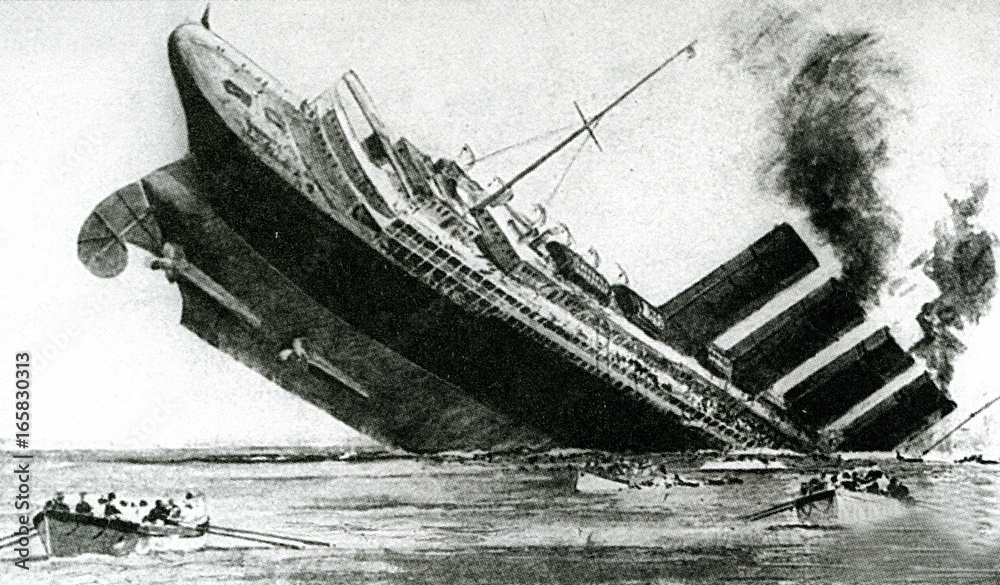 There are other insurance disputes that arose quickly, either directly or indirectly, out of the sinking of the Lusitania, and those will be discussed in separate parts. The case to be discussed here, however, was not only a life insurance case, but it arose out the Japanese attack on Pearl Harbor, December 7, 1941, so the relationship between risks of war, the nature of war, and insurance were again mixed together.

The style of this case is Pang v. Sun Life Assurance Company of Canada, 37 Haw. 208 (1945). It must be remembered that Hawaii at the times relevant here was still a territory of the United States but not yet a state.  Thus, the decision was one of the Supreme Court of the Territory of Hawai’i.[1]

In any case, the plaintiff, Gladys Ching Pang (“Pang”) sued Sun Life because it denied double-indemnity coverage for her husband’s death.  Tuck Lee Pang was an employee of the Honolulu Fire Department and was killed putting out fire at Hickam Field.

There was no dispute that Mr. Pang’s death was “a death by external, violent and accidental means” falling within the meaning of the double-indemnity provisions of his Sun Life insurance policy.  The sole question was whether his death was or was not a death “resulting from war or any act incident thereto” and so be excluded from that provision.

The trial court sided with Sun Life; the plaintiff took exception to the court’s decision and judgment, and the case went to the Supreme Court.

All relevant acts were stipulated: cause of death, Japanese attack, declaration of war by America the following day, the language of the declaration, and so forth. Hence, as the Court puts it, “the real question before the court is, ‘were we at war with Japan on December 17, 1941?’” (There was another point of error—another “exception,” to use the lingo of the jurisdiction at the time—but the court did not rule on it.[2]

The Court’s reasoning is almost entirely theoretical, or philosophical, with only a twinge of the practical, and then only in the abstract. Here is a crucial section:

Various juridical consequences may flow from the existence of a state of war between two countries. For the purpose of determining when these consequences are produced, it is important to ascertain the date of the beginning and the date of the termination of a war, and it is desirable that these dates be fixed with exactness. Different dates of beginning and termination of a war may be set for different purposes. . . .

One must also keep in mind, said the court, that there are differences recognized, not always consistently, between a “state of war” and an “act of war.” Most significantly, the latter does not always include the former, or even cause it. And it must also be kept in mind that an announcement by a government that it was going to do something that would be an act of war is not itself such an act.

Given these distinction and this logic, it seemed clear to the court that a state of war did not exist between the United States and Japan on December 7th, even after the attack began.

Another way to think about this would be to distinguish amongst various types of acts of war.  Some of them start wars; some of them, as it were, invite a war; some of them provoke the start of a war; some of them are in a different war; and some of them don’t have any consequence at all. It was clear, said the court, that the United States did not regard itself as at war with Japan until Congress declared war the next day.

According to the Court, these facts and their context differentiate Pang from Vanderbilt. In that case, a war was going on between Great Britain and Germany; the Lusitania was right in the way of it, even if it was not in the thick of it; and Alfred Vanderbilt was on the ship. The historical context in Pang was quite different. There was no war going on between Japan and the U.S., though there were other wars going on that included Japan. But Pearl Harbor and Hickam Field were not in the thick of the action or right in its way. Consequently, Vanderbilt is not precedent for anything in Pang.  (The cite for the earlier case is Vanderbilt v. Travelers’ Ins. Co., 184 N.Y.S. 54 (1920), aff’d 139 N.E. 715 (1923)

It is puzzling to me that Sun Life would have failed to settle this case.  Maybe that’s because there were a good number of other cases like it and the insurer didn’t want to take “slippery slope” type chances.  Maybe it’s because in that place and that time, there was public hostility toward people with names like “Pang,” whether there were Japanese, Chinese, or something else.

——
[1] The apostrophe is right there in the word. I’m not making it up.
[2] The issue was whether the trial court erred in refusing entry into evidence the fact that Sun Life changed the double indemnity provision shortly after December 7th. It inserted immediately after the word “war” the phrase “whether declared or not.” For what it’s worth, I am inclined to reject the views of both the lower and the upper court. The addition of the new phrase is evidence that Sun Life though the existing formulation was at best unclear, vague, and/or ambiguous. If so, then a coverage issue should be resolved in favor of the insured and therefore the plaintiff. I wonder if in today’s world that might not constitute empirical evidence in support of an insurer bad faith case.